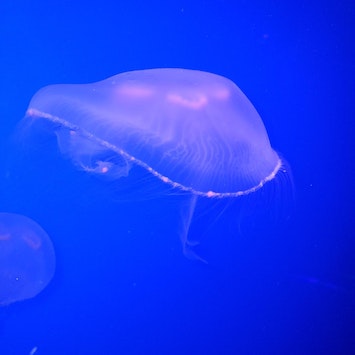 We are so excited to have our Moon Jellies back on display at Discovery Place Science. Moon Jellies are one of the oldest species on the planet, having been around for more than 600 million years. In nature, they are found in oceans around the world, including the Atlantic and Pacific.

The Moon Jellies at Discovery Place eat a diet of baby brine shrimp, which are orange in color and can be seen through the stomach at the top center of the bell. The four horseshoe-shaped rings that can be seen are their gonads. The jellies breathe by diffusing oxygen from the water directly through their tissue.

We propagate our Moon Jellies by recreating their lifecycle. We keep polyps which can be induced to produce larvae (a process called strobilation) by simulating a seasonal shift with a fluctuation in temperature. The polyps sense the temperature change and produce offspring just like they would in the wild when the seasons shift and temperatures change. We raise the tiny baby jellies (called ephyra) until they are adults. Jellies usually only live for a few months to a year. At Discovery Place, we continuously produce them so that we can always have some for visitors to see!