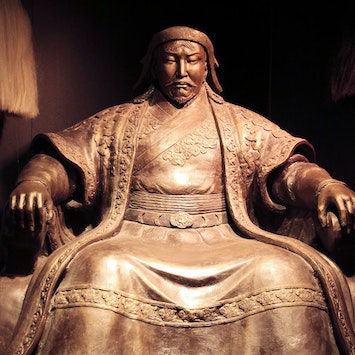 Plan A VisitGenghis Khan was the world’s greatest conqueror, civilizer and innovator, but how much do you really know about him? Here are five fast facts to know before you visit Genghis Khan at Discovery Place Science:

1. No one actually knows what he looked like.
During his lifetime, Genghis Khan forbade anyone to paint his portrait or sculpt his image. After his death, his devoted followers captured his likeness in many ways and forms, preserving his image for future generations, though to this day, no one knows for sure what Genghis Khan actually looked like. One writer from the 14th century claimed that Khan had green eyes and red hair.

2. He came from humble beginnings.
“Genghis Khan” loosely translates to “oceanic ruler.” Before Genghis Khan became a great ruler, he was known as Temujin. Legend holds that he came into the world clutching a blood clot in his right hand.

3. He might be your distant relative.
Genghis Khan had six Mongolian wives and over 500 concubines. Geneticists estimate that 16 million men alive today are genetic descendants of Genghis Khan, making him one of the most prolific patriarchs in history.

4. He was not just a ruthless conqueror.
While Genghis Khan was a merciless warrior, he was also a savvy statesman who developed written language and a sophisticated society with fair taxation, stable government, appreciation of the arts, religious freedom and open trade along the Silk Road.

5. He established the concept of passports.
Genghis Khan established passports to protect diplomats, merchants and messengers. Metal tablets forged from gold, silver or iron were often printed in multiple languages so they could be understood across the different cultures and languages spoken in the great empire. Unlike the passports of today, these plaques demanded the safe passage of the traveler. Anyone who declined or disobeyed the order was killed.

While this limited-run exhibition may be closed, there's a lot to explore at Discovery Place Science. Get your tickets today!