Why do we salt roads in the winter? 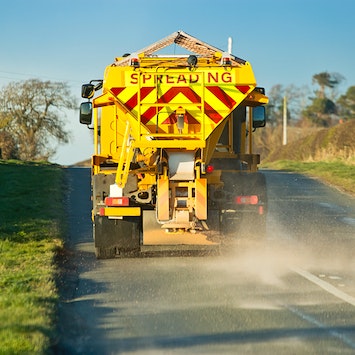 Every winter, Charlotte only sees an average of about 4 inches of snow per year, but we also receive the most ice per year.

In anticipation of winter weather, Charlotte’s Department of Transportation will spray a wet mixture of two types of salt — sodium chloride and magnesium chloride — along with water to make a "salt brine" on key streets. This method is called anti-icing, or pre-wetting, and is a technique used by many U.S. cities as preventative measure before inclement weather arrives.

Once there is an accumulation of precipitation, you may also see salt trucks spreading hard rock salt over snowy and icy roads.

So why do they do this? Why does salt melt ice and snow?

As the ice melts into puddles of salty water, it will spread to the surrounding roads, mixing with other nearby ice. Eventually, the whole surface of ice will become a salt slushy that won’t melt unless the temperature outside drops significantly. How fast the ice melts and how low the freezing point of that puddle gets will depend on how much salt you add.

Just as salt lowers the freezing point of water in cold temperatures, it also raises the boiling point in hot temperatures. You can see this principal in action when cooking pasta.

With a little help from science, you can now enjoy your snow days with safely salted walkways and a steamy pot of pasta!