Aliens and the Webb Telescope

Aliens and the Webb Telescope

Exploring the Cosmos with Telescopes

If you’ve seen Discovery Place Science’s latest traveling exhibition Apollo: When We Went to the Moon, you may be wondering: If we’ve spent so much time exploring the cosmos, where is all the intelligent life out there?

Well, scientists are wondering the same thing! The Fermi Paradox – named after physicist Enrico Fermi, is a paradox that focuses on this topic. The basic idea is, if there is so much space out there, then why haven’t we contacted life?

Well, the short answer is, we don’t know. There are many theories about how we’ve managed to yell out at the cosmos for so many years and no one has responded. (Yet!) But how do we know there isn’t life out there we can reach?

Telescopes! Telescopes in space capture light from planets passing in front of a star and send it to a special tool called a spectrometer. The spectrometer divides the light into a colorful spectrum. Any colors that are missing are being blocked by elements in the atmosphere.

Along with the Hubble Telescope, these telescopes allow us to find exoplanets and look at the composition of their atmospheres to see if life is possible on them. The James Webb Space Telescope will be crucial in our quest to find extraterrestrial life. 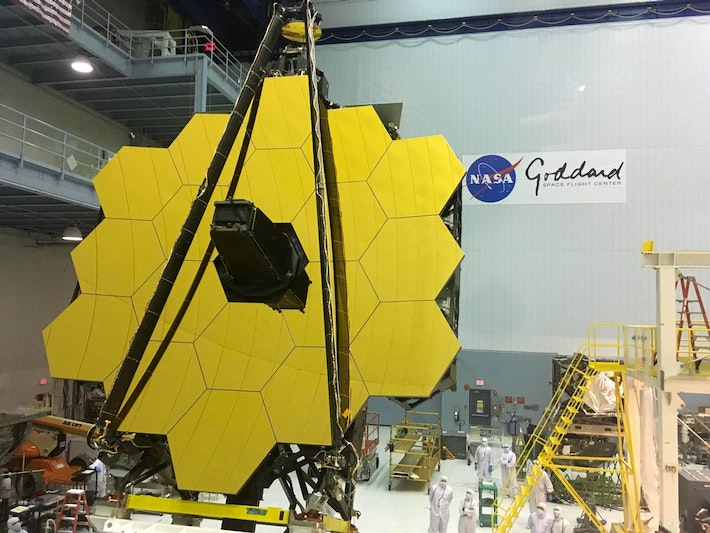 Take a peek at this rare view of the James Webb Space Telescope face-on, from the NASA Goddard cleanroom observation window. Those golden hexagons are powerful mirrors used to detect light from distant galaxies.

When launched in December 2021, the James Webb Space Telescope will be able to view galaxies and stars in infrared, which will allow us to see celestial bodies in great detail. As stars and galaxies move away from us, they are “redshifted,” so we need to see in infrared to be able to spot them.

Will the James Webb Space Telescope see aliens? Maybe not, but it will get us one step closer to finding extraterrestrial life!